Optical devices are among the most used and widespread technologies currently employed to perform quantum computations and quantum information processing tasks. They are usually cheaper than other implementations and are natural candidates for realizing communications protocols: Once a photonic state is produced, it can travel long distances while exhibiting low decoherences and it’s state can be manipulated with high precision.

In this article I will discuss a brief introduction to the basics of performing quantum computations with single photons.

What is a photon?

We’ve all heard that light can behave as both a wave and a particle, and more than once I have personally ended up with a headache while my mind tried to wrap around the particle-wave duality.  When you see a rainbow (or Pink Floyd’s Dark Side of The Moon album cover), you’re basically watching how light waves bend (refract) as they enter a different medium at an angle. But as Einstein proved in 1905 by explaining the photoelectric effect, light can also behave as a particle. Einstein proposed that photons are the basic elementary constituents of light which contain the energy corresponding to their wavelength.

Thus, photons are quantum systems that can be seen as energy packets traveling thought  space at the speed it light.

In order to further illustrate how light can behave as a wave and as a particle in an optical circuit, let us consider an experiment in which light  is sent through a 50/50 beamsplitter (BS). 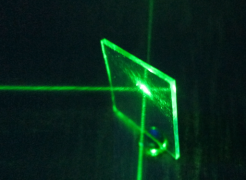 Fig. 1: A beamsplitter is an optical device that splits a beam of light in two.

A classical pulse of light pulse of intensity

is split into two independent beams of intensity

However, when a single photon passes through a beamsplitter, something completely different happens. Just like Schrödinger’s cat, the resulting quantum state for the photon is a superposition of the photon traveling trough one path or the other. The final state of the single photon features Quantum Correlations that can be used in Quantum Information schemes [1].

Requirements for Quantum Computation with Light

As discusses in this article, in order to perform information processing tasks with a given quantum system, one must be able to:

Although these conditions are not necessarily universal, they will be helpfully to guide the present article and understand quantum computation with light. 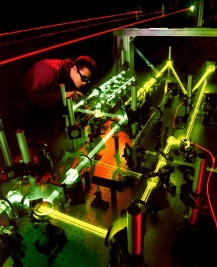 Fig 2: Even an attenuated laser pulse can contain a large large number of photons.

It’s easy to think that optical schemes employ lasers to produce quantum states, but the reality is that  laser pulses can contain an extremely large number of photons. For instance, a laser pulse of 1 J at 532 nm contains in average

Even an extremely attenuated  pulse can posses (on average) more than one photon. Hence, in the past few decades a considerable amount of effort has been put forward towards developing optical devices which can precisely produce one photon at a time.

One such way of preparing single photons is through isolates two-level atom-like systems such as atoms, quantum dots or color centers [3]. Here, the system is excited so that a single photon is emitted when it decays back to it’s ground state.

Another proposal to create single photon states is through a process known as Spontaneous Parametric Downconversion (SPDC), where a pumped laser pulse passes through a nonlinear medium in such a way that there is a chance for correlated pairs of photons occasionally to emerge. This phenomenon can be understood in a quantum-mechanical framework as a process in which a single pump photon is annihilated and two lower energy down-conversion photons are created, under the
conditions that energy and momentum are conserved. Two different types of SPDC can be distinguished: when the photons have the same polarization which is
orthogonal to the polarization of the pump laser (Type-I), or  when they have orthogonal polarizations (Type-II). 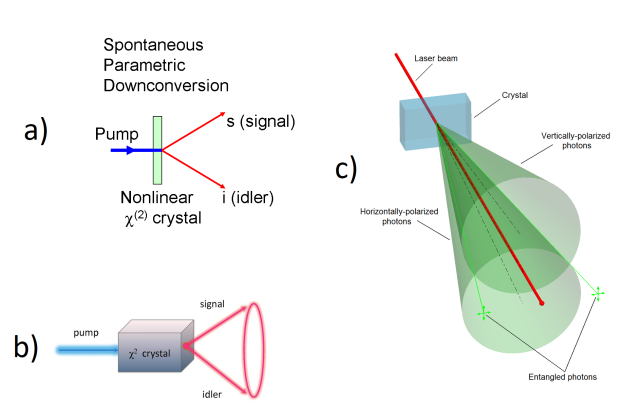 per photon passing through the crystal, but since a pumped laser pulse contains an enormous amount of photons, the resulting probability is high enough for experiments to be feasible. I’d also like to mention that more than two photons can be created in a SPDC, but the probability of such an event can be neglected (even when considering all the photons that interact with the crystal per unit of time).

So, how can this process to prepare single photons states for our circuit? Well, we “simply” [4] have to create an optical scheme so that when a pair of photons is created one heads towards a detector and the other towards an optical fiber. That way, when the detector clicks, we know that a single photon has entered the fiber.

Let’s consider now how to encode information in a single photon quantum state. In other words, this means that we have to determine in which degrees of freedom we are going to realize the qubit. One possibility is to send the photon through a BS and use it’s path to encode information. Here, the states

correspond to the photon being on one path or the other.

One could also encode information in the polarization degree of freedom of the photon. Thus, a photonic qubit can be defined as

represents the horizontal polarization and

and the circular polarization basis

Fig 4: Information can be encoded in the polarization degree of freedom of a photon.

Now that we have understood how to codify information in our photonic state, we still need to be able to manipulate it. Luckily, this problem has already been solved by physicists and engineers who have worked with classical light. For instance,  the polarization of a photon can be controlled with wave plates, and by combining different wave plates we can perform single-qubit gate operations.

In particular, by means of a half-wave plate (HWP)

and a quarter-wave plate (QWP)

we can perform any quantum operation on the photon qubit state:

Note that we can convert between polarization and path encoding by using a Polarizing Beamsplitter (which split light by polarization state rather than by intensity).

As a final remark for this section, I’d like to mention that there are also other schemes to encode information in different photonic degrees of freedom, like the single rail encoding or the temporal profile encoding, but I will not describe those in this article.

) that are constrained to be within two cones, whose axes are symmetrically arranged relative to the pump beam [7]. If the axes of the cones are such that the cones intersect, then photons emitted into the directions of the lines of intersection cannot be assigned to one of the cones. This process results in a pair of entangled photon whose polarizations are perpendicular:

Thus far we know how to prepare single photon states, entangled states and how to manipulate each photon individually. However, we know that in order to achieve a set of universal quantum gates (i.e., a set of gates to which any operation possible on a quantum computer can be reduced) we need two-qubit entangling gates.

This requisite is met quite easily in quantum computing schemes based on interacting systems such as superconducting Josephson junctions, cold atoms in optical lattices, trapped ions and quantum dots. Unfortunately, photons only interact weekly with their environment and with each other. This feature may allow us to transmit quantum photonic states over long distances with low decoherences, but at the same time it makes the task of creating two-photon gates a difficult one.

Since two-photon operations are inherently nonlinear, and up to the this date there are two different proposals to perform entangling logic gates: using nonlinear optical components, and using ancilla photons and postselection to provide measurement-induced nonlinearities [6,8,9].

The first approach uses optical nonlinearities such as:

In the second approach, ancilla photons are combined with the logical qubits by means of beam splitters and phase shifters. Then, the ancilla photonic qubits are measured so that we know that the correct logical output was produced if the measurements yield certain results. The output can be corrected for other measurement results.

Even if in the first approaches we have to deal with photon losses and small nonlinearities, their main advantage over the second ones is that they require much less resources when compared to linear optics measurement-induced nonlinearities.

By now, the only ingredient we are missing to perform quantum computations with photonic devices is the ability to measure single photon states. Ideally, a single-photon detector should have [12]:

Until then, we will have to make do with what we have.

Linear optical devices have provided us with an attractive scenario to study and realize quantum information processing tasks. Nowadays they are used for a wide range of applications like the simulation of quantum systems, cryptography, transmission and teleportation of information, quantum key distribution, quantum metrology and as hardware to perform quantum algorithms.

However, several problems still have to be overcome before a large-scale optical quantum computer is to be realized. Most optical devices are not scalable due to their single photon sources and large amount of optical elements, while at the same time more efficient methods for the creation, manipulation and detection of single photonic qubits will have to be developed.

Various devices are currently being developed to overcome such problems, like hybrid systems, which combine photonic qubits with quantum systems which easily enable multi-qubit interactions; and on-chip silicon photonic technologies [13] which are easy to fabricate and are therefore promising to be cost-effective.

[4] Generally, the down-conversion photons are not in the visible range, and the alignment process of the optical devices can be a tough and time consuming task! Thank you experimental physicist, we love you!

[6] Quantum computing with photons: introduction to the circuit model, the one-way quantum computer, and the fundamental principles of photonic experiments. S. Barz, J. Phys. B: At. Mol. Opt. Phys. 48 083001 (2015).